Right about the time that diesel locomotives were gaining ground on the older steam locomotives, some railroads redesigned their steam engines.  By streamlining their design, the railroads hoped to keep the steam engines running.  In some cases, the re-design was made so that the older steam engines would match the look of the diesel locomotives. In others, doubts about the power that could be obtained from diesel engines was the reason.  For whatever reason, the result was a collision between traditional engineering design and the leading art movement of the time, Art Deco, to create some amazing examples of railway design.

A description of all that the Art Deco Movement encompasses would take much more than a single blog post. (See the Wikipedia article for a good introduction though.) Suffice to say that Art Deco is in a way a reaction to the earlier movement, Art Nouveau.  While Art Nouveau features themes from nature and sinuous curving design elements, Art Deco encompasses more severe geometric forms.  Art Deco’s features celebrate the exuberance of the future and its new technologies. One word that is often used to describe Art Deco is streamlined, and that is the exact reason for the redesign of steam engines in the late 1930s: to make them look fast and luxurious. Ironically, little if any performance improvements were realized as the additional weight of the streamlining offset any advantage in lowering wind resistance.

In most cases, the redesign was only skin deep:  a streamlined shroud was placed to cover up all the pistons, brakes, pipes, cranks, and connecting rods that would normally be exposed in a steam engine.  The first of these streamlined steam locomotives was New York Central Railroad’s Commodore Vanderbilt which started service in 1935.

A similar shroud was used on the Chicago, Milwaukee, St. Paul, and Minneapolis Railroad’s Hiawatha that was delivered later that year.  Even its advertising  is Art Deco!

Advertisement for the Milwaukee Road’s Hiawatha streamlined steam engine. Even the stylized depiction of the Native American chief Hiawatha is Art Deco.

The Burlington Route one-upped its competitors and wrapped an existing steam engine in a stainless steel streamlined shroud, which, I think, vaults its design from 1930s Art Deco to 1950s science fiction movies.

Not all streamlined steam engines featured the shovel-nose design.  In 1938, the New York Central received the first of several bullet-nosed locomotives. 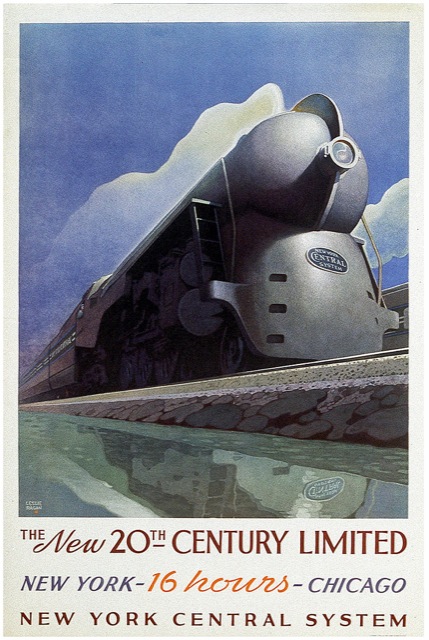 A similar locomotive was built for the Southern Railways.  Even though the shroud does not cover large parts of the mechanics of the engine, its curved shape and design makes it look fast even when it’s not moving. 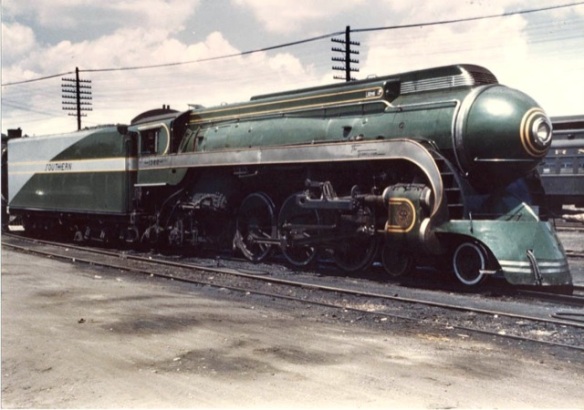 Streamlined locomotive built for the Southern Railway for its Tennessean train.

After World War II, the steam engines in the US were being passed up by diesel engines.  A few streamlined steam engines were built, but the last one was delivered in 1946 and almost immediately was mothballed.

I would be remiss if I didn’t mention the most famous streamlined steam engine of all: Britain’s Mallard, famous for setting the record for fastest steam locomotive at 126 mph.  The Mallard was designed specifically to be a fast, high-powered streamlined locomotive as opposed to most of the US engines which were retrofitted with the streamlining. Thus, it could run at high speed for extended periods. The Mallard was in service from 1938 to 1963.

The Mallard steam locomotive outside the National Railway Museum in York.

While I have a deep admiration for the almost living quality of the traditional steam locomotives, I find it interesting how the Age of Steam held on well into the age of their diesel replacements.  Steampunk vs. Dieselpunk?  There’s room for both!

If you want to read lots more about streamlined steam trains, I recommend this site with a comprehensive history of them.