An item from the always interesting History Myths Debunked blog brings up the notion of the Coffin Corner. 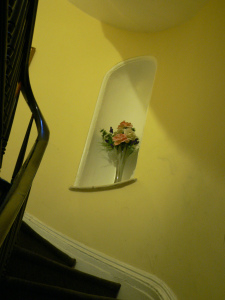 In many old houses, at least in many that have steep winding stairs, at the bend in the stairs, there will be a sort of niche in the wall, typically housing a vase with some dried flowers, or maybe even a marble bust, if the house is fancy enough. These little niches are sometimes called “coffin corners”, and were purportedly built into the wall to allow a bit more room to navigate a coffin around the bend in the staircase.

While it’s true that in Victorian times, many people died at home, and some families had wakes or visitations with the dearly departed laid out in the front parlor, I can find no contemporary citation that these niches were used to assist in bringing the encased remains downstairs.

First off, why carry a heavy coffin all the way upstairs, then down again (now loaded), when it would be much simpler just to bring the corpse downstairs?  Secondly, why are they more likely to be found in fancier houses, and not the more modest homes with presumably tighter staircases.

To my mind, this story sounds like a bromide endlessly repeated by docents in historic house museums because it sounds plausible enough, and entertains the tourists with a rather macabre thought. 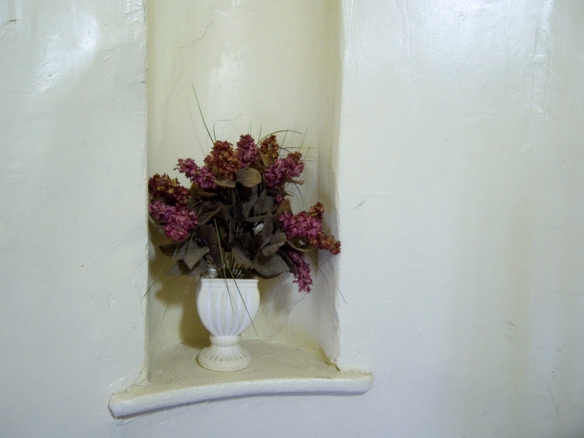 As it turns out, our house, an Italianate Victorian, is just the type to have a coffin corner—a tight tall staircase with a turn near the top.  And we do indeed have a curved corner at the turn that would be perfect for a coffin corner.  The family that built our home were even plasterers, and eminently qualified to have installed a useful niche when the house was under construction back in 1880.  But alas, we don’t have one.

And it would really come in handy in bringing large furniture up to the second floor.