Almost a decade ago now, my block decided to go all out for Halloween and to decorate to the max for the Trick or Treaters. And it has worked–we typically get 400-500 kids come by. It was also the beginning of my now yearly October making spree.

The first year, we decorated as mad scientists–not a big stretch since my wife and I are both chemists, and let’s just say I had a lot of labware hanging around.  A large glass beaker of rats spinning around, a jello brain, and some black lights to make the flasks of potions glow were all it took. Oh, and I was dressed up in lab coat and crazy mad scientist hair.

The next few years we modified the mad scientist theme into “Alien Autopsy”.  We had a papier-mache dead alien on a slab.  The key joke here was that his little three-fingered hand could be made to move via strings under the table.  We got more than a couple of screams out of that gag (mostly from adults).  We had a “life-sized” crashed flying saucer in the front yard one year, and one crashed into the house (not as successful) another year.

Alien Head in a Jar

By 2009 we thought we had done all we could do with the Alien Autopsy theme and changed to Harry Potter.  And this is when the creative juices really started flowing.  There are so many iconic props from the movies and the kids in the neighborhood really got into them.

Levitating candles, Azkaban wanted posters, a Nimbus 2000, Tom Riddle’s diary (with Basilisk fang), and Sorting Hat (bought retail)  were all made as part of the first year’s decorations.  Plus, I made Hogwarts-esque gothic arch overlays for the front windows of the house.  The highlight was the Pensieve, which not quite as nicely decorated as this one, kept the kids guessing.  Oh, yeah, and there were wands, lot of wands, some which lit up, some lit up in black light to reveal secret writing, if you know the proper spell!

Hogwarts Milepost. Note the gothic arches and dementor on the front of the house.

Dumbledore (yours truly) looks after the Pensieve, the Marauder’s Map and Tom Riddle’s Diary

The next year Fawkes paid a visit.  I used Halloween as an excuse to learn a bit of Arduino programming to allow Fawkes to move his head and open and close his beak.  A huge project–I don’t want to glue as many feathers on anything ever again.  Between Halloween, Fawkes resides in our front parlor.  Some Victorian homes have a stuffed peacock, we have a phoenix. 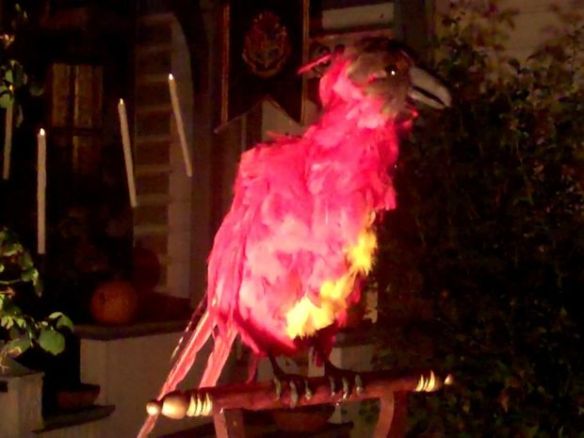 Animatronic Fawkes the Phoenix. In the background, you can see some levitating candles.

Last year’s addition was Sorting Hat which spoke and sorted the Trick or Treaters into their proper houses, again using an Arduino to manage the audio files.  It was a fun project even though my original concept was to animate the “mouth” of the hat in time with the words (a bit beyond beginning Arduino programming, it seems).  I also learned that nowhere in the movies does the Sorting Hat actually say “Ravenclaw!”, so I had to record that one myself.

This year, we’re changing themes again to Game of Thrones.  I’ve put together a reasonable Ned Stark costume from modified thrift store finds, and I’m building the Iron Throne.  I can’t show it to you yet, because it’s still just an old kitchen chair three days before Halloween–lots to do tomorrow!

And just so you know that I’m not the only crazy one on the block, our next door neighbors are into their second year of a Jurassic Park theme (they’ve transformed their front porch into the Jurassic Park gateway), and the neighbors down the street recreate Tortuga in their front yard and make Trick or Treaters walk the plank if they want candy. And there’s a house not too far away that does a multi-month build with a different theme every year.  This year is Lord of the Rings, and it appears as if they’re building a life-size Smaug, plus Bilbo’s House and the tower of Barad Dur.  But I never get to see it because we’re always so busy on our street!

And there are plenty of over-the-top Halloween decorations on the web as well as great how-tos on Instructables and Make Magazine.

By the time the last candy has been given out, and only sullen teenagers (without costumes!) are trolling for dregs, it does seem like a lot of work every year for just a few hours of fun.  But the neighborhood all comes together and puts on a great time for the kids (and the adults too!), so after I decompress with a Butterbeer, I start thinking about projects for next year.

1 thought on “Halloween: The Holiday for Makers”