During the Victorian Era, the wide availability of water-powered and later, steam-powered, machinery made fabrication of architectural details much less labor intensive than previously. Creative ornamental details no longer required the skills of a wood carver, master carpenter, or stone mason, and many architectural elements could be factory-made and ordered from catalogues. In fact, architectural ornamentation became so inexpensive that several home styles in the US are known for their overabundance of gingerbread. Even industrial spaces were built with included ornamentation.

As the Steampunk Aesthetic relies heavily upon Victorian design, it follows that much of Victorian design could also be called “Steampunk”. And since, steampunk overlies a veneer of fantasy, whimsy, or imagination onto the wood, bricks, and cast iron of the Victorian, the more ornate the building the better.

So, what do I think are some examples of real-life Steampunk Architecture?

Here’s an example of a humble home. Well, maybe not so humble. The Carson Mansion in Eureka, California was built by William Carson, the owner of a local lumber company. It took four years to build at a total cost of $80,000 (I guess lumber is cheap if you own the mill…) It’s generally considered to be in the Queen Anne style, although if you look, you can find elements of several other Victorian styles. Unfortunately, it presently houses a private club and no tours can be had of the interior.

A somewhat simpler, but no less fanciful, home is the Armour-Stiner House in Irvington, New York. This house follows a short-lived 1850s fad for octagonal houses, which offer the advantage of enclosing a larger area for a given perimeter wall length, and the disadvantage of weirdly shaped rooms. Built in 1850, it features a veranda completely encircling the home. In the 1870s, the second owner added the dome and cupola, following the octagonal scheme. The dome also sports interestingly patterned slate tiles, a detail that only exists to be decorative.

On the industrial side of things, the Victorians did not shirk in making interesting even the most mundane building. Once the city of London finally had a functioning sewage system, raw waste no longer flowed out of open ditches directly into the Thames. No, now it was collected into an efficient system of pipes and tunnels and directed 14 miles downstream where it was then dumped into the Thames. The grade was so gradual, however, that pumping stations were needed to ensure the sewerage was discharged well away from the capital. The Crossness Pumping Station was opened in 1865 and has been called, “a Victorian cathedral of ironwork”. Fortunately, when it was finally closed in the 1950s, it was not economical to remove the pumps, so they remained forgotten and untouched, waiting for the renovation of the site which started in the 1980s and continues. Apparently, part of Sherlock Holmes (Robert Downey, Jr. version) was filmed here. Now that I know this, I’ll have to watch it again and look for ornate ironwork in the background. 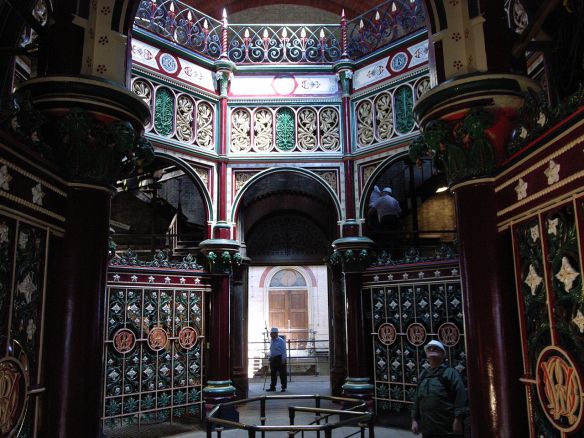 The “steampunk” building that may hold the record for being a film venue though is the Bradbury Building in Los Angeles. I have to admit that Los Angeles and Victorian architecture don’t seem to go together in my mind, but apparently some still exists. The Bradbury Building was constructed as an office building in 1893. It features a central atrium topped by a skylight. Ornate cast iron railings surround the atrium rising five floors. Old-fashioned “bird cage” elevators still carry passengers to the upper floors. The building has been used as movie and television locations since the 1950s, most notably in Blade Runner (the building where JF Sebastian lives), but also for films ranging from D.O.A. to The Artist, and too many television shows to mention. 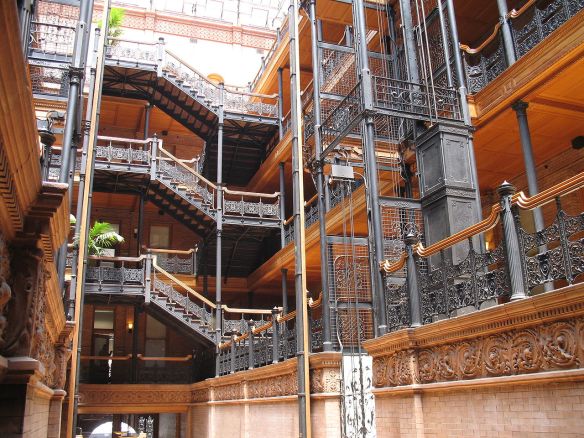 I think any of these real-life Victorian buildings would pass the test as being “Steampunk” as well. I can see a photo shoot of corsetted women and begoggled-top hatted men taking place in front of any of them.  Any other suggestions?